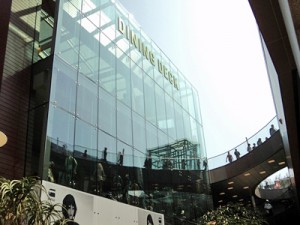 Yesterday, we went out to Santa Monica to see SPL Realty Partners president Scott Lifschultz, who tells us now that the recession’s receding, clients are positioning themselves for growth and “actually making deals.” Scott represents a number of retail chains including CVS, Casual Male Retail Group, Dean & DeLuca, and Johnny Was. He repped the latter in its lease at Santa Monica Place—the world’s first Johnny Was retail store, and “we just closed their second deal in Los Angeles.” He’s seeking more locations across the US for the bohemian chic clothing designer. Scott says he can’t talk specifics now (but check back with us later).

We took this at Santa Monica Place’s grand opening last year—the Johnny Was store is located across from Michael Kors, Scott says. Another thing keeping him busy: trying to find a replacement tenant for Dean & DeLuca’s never-opened store at Fashion Island in Newport Beach. The gourmet food emporium signed a lease with The Irvine Co for a West Coast flagship but opted not to move into the 23k SF space. Scott, who didn’t do the original lease, is working as a consultant on behalf of the retailer. Before launching SPL Realty in July, he served as an SVP with Robert K. Futterman & Associates in Santa Monica. He’s been in the biz more than 20 years and done over 1M SF of sales and lease transactions totaling $1.5B. 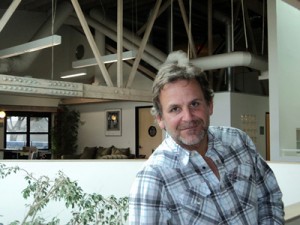 Before yesterday’s winds roared in, we snapped this of Scott on the bluffs overlooking the Pacific Ocean. (His office is about a block away.) But it wasn’t just the beach that lured the avid surfer from New York. A retail group he started for a brokerage firm back East was purchased by GVA Williams, which wound up selling to the parent company of Colliers International. “That afforded me the luxury to come out to California.” Then the recession hit. “We weren’t able to get any deals done, but it was a great way to learn the market.” Scott’s wife, Marlies Pinto, also knows a thing a financial success. She’s an actress and won a substantial amount of money on the game show, Are You Smarter Than a Fifth Grader? Together they have a 20-month-old daughter, London Shayna. The family also includes “an amazing chocolate Lab” named Bella. 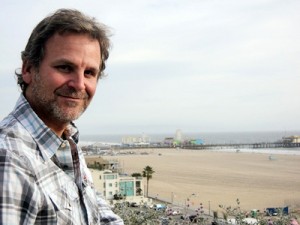