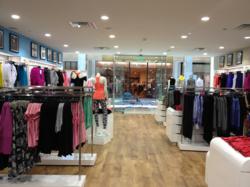 The prominent retail sites are located throughout the Southern California region including stores in Santa Monica, Woodland Hills, Glendale, Irvine and Huntington Beach. A warehouse was also secured for the support of the network of retail stores and online fulfillment in Santa Monica, Calif.

Founder and Chief Creative Officer Lorna Jane Clarkson said she and her husband, Bill Clarkson, CEO of Lorna Jane, are proud to be represented throughout California and the United States by retail leasing expert Scott Lifschultz, founder and president of SPL Realty Partners.

“At Lorna Jane, we operate at an exceptionally fast pace, so it was critical for Bill and I to identify a real estate company that would not only support us in our new venture, but take our expansion plans to the next level,” Lorna Jane Clarkson said.

“As we are based in Australia, the consistent dedication, diligence and focus of Scott Lifschultz ensures Bill and I can comfortably make business decisions from the other side of the world. We look forward to experiencing further retail success with SPL as we continue to grow our presence throughout California and the United States,” she said.

The locations that SPL Realty Partners have secured on behalf of Lorna Jane include:

Scott Lifschultz of SPL Realty Partners commented, “Lorna Jane is taking California by storm. There will be 11 or 12 stores open by the end of this year with another 20 new stores slated for 2013.”

Lifschultz continued, “This is not about just opening stores; there is a much greater picture here. It’s about building a brand, awareness, and giving the customer a choice. Bill and Lorna have such a passion for life and their business and a clear vision to becoming the best women’s active-wear brand in the world. It’s truly an honor to be an integral part of their growth here in the U.S.”

Lorna Jane is a premier, Australian-based women’s active wear label, and has been at the forefront of fitness and fashion for more than two decades. At Lorna Jane our aim is to inspire women to live their best life through active living. We believe in a three-pillared philosophy of MOVE NOURISH BELIEVE, and it is this mantra together with our clothing that encourages and motivates women globally to be the best they can be. For more information please visit http://www.lornajane.com.

SPL Realty Partners is a Los Angeles-based retail real estate brokerage and consulting company primarily focused on representing retail chains with their real estate strategies and expansion throughout Southern California and the United States. For more information please visit our website at https://splrealty.com